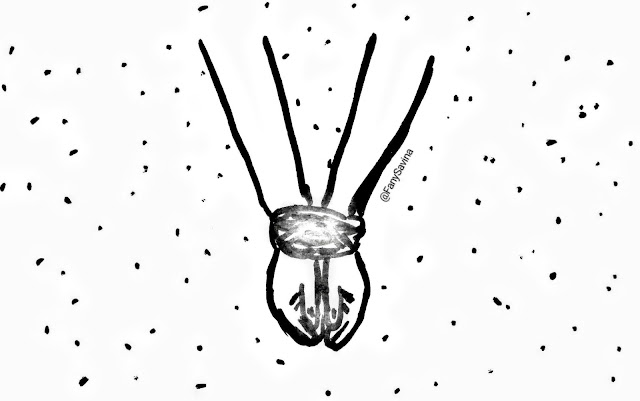 "Come on baby..."
He looked at her with small pleading eyes and tried his best to look cute. It wasn't very effective. She rolled her eyes and sighed.
"I told you I can't."
"Why not?"
He was starting to remind her of her kids. Why not mommy? Why not? It was getting on her nerves.
"Because I can't."
He turned over to face away from her on the couch, and started to pout. When she didn't react, he turned back around.
"If you can't come over to my place, then why don't I come to yours?" He looked expectantly at her, watched her scroll down her Facebook feed on her phone. "I could finally meet your aunt."
At the mention of her aunt, her head popped up and finally looked at him.
"What?"
"I could come over to your place, meet your aunt. Have you told her the good news?" He looked down tenderly at her stomach and stroked it. She nudged his hand away.
"Yes, she knows."
"Then doesn't she want to meet the father?"
The young woman grimaced and got up from the couch.
"I should get home."
"Already?"
"Yeah, it's getting late."
He didn't say anymore and accompanied her to the door of his flat. The goodbye was quick, a little platonic peck on the lips, and it left him sad and hungry for more. He waved goodbye to her as she pulled out and away in her car, and immediately got on his phone to send her a message. Get home safe, take care of yourself and the baby.
It was marked as read and he received no reply.

A few days later, he called her. When she answered, her voice has hushed and furtive. It threw him off.
"Are- are you ok?" He barely heard her answer and put the phone closer to his ear.
"I wanted to ask your address, I want to surprise you and come over. I know it's not much of a surprise now, but I really want to take our relationship further. I want to meet your family and start building a bond with them."
There was silence on the other end of the line. He started to wonder if they'd been cut. Then he heard a sharp intake of breath and she started to talk.
"I can't talk. I don't know where I am. I'm in the trunk of a car." The man was speechless. He managed a stuttered wha-at?
"It's my ex, he found me, he's crazy, he tied my hands and put me in the trunk of his car. I don't know where we're going. So you can't come over."
"Are you ok?! Did he hurt you? Is the baby ok?!"
"I'm only one month pregnant, not much can happen to the baby..."
"Hold on, stay calm, I'll think of a way to help you. Do you have any idea where he might be taking you?"
"I've got to hang up, I think he's coming. You can't come over."
Before he could get another word in, he heard the beep of the call ending. He was paralysed. He didn't know what to do. He stood there for what seemed like an eternity, until it dawned on him that he had to do something. He had to get help. He unlocked his phone and called the police.
When a woman answered on the other end, he tried his best to explain what had happened, even if he himself was having a tough time taking it in.
The woman appeared concerned and tried to calm him down.
"Don't worry sir. We take this very seriously. We won't let some madman do what he wants with a pregnant lady. Kidnapping is a serious offense. Where do you say she lives?"
"I don't know exactly, we've been together three months, I was going to meet her family this weekend. All I know is it's somewhere in Giromagny."
"Alright sir. We'll send out a patrol to try and find her or the vehicle, and we'll contact the local police to locate her too. We'll see if we can use the helicopter to try and sweep the area too. Don't worry sir, we'll find her."
Relieved that his call was being taken so seriously, he provided what further details he could, and when he hung up he was still worried, but he had started to hope. He checked his phone constantly to see if she had managed to send him a text or not. She had not given him any news. He waited, his eyes riveted to the screen.

The police station was alive with people going in all directions. People were on phones, asking for information, others were gearing up to go with the driving squad.
Someone shouted from across the room; "Where are we on the helicopter?"
An answer came back, "we can't take off, it's too late, it's too dangerous."
Policemen and women were calling their families to warn them they would be coming home late, something terrible had happened, someone had kidnapped a pregnant lady, it was imperative to find her.
A small team in a corner was working on trying to find the last pinged IP address of the victim. It was strange, she had been online not thirty minutes ago.
Also, they hadn't been able to find her in Giromagny. Nor were they able to find her aunt. Finally, one person called out "Hey! I think I've got her location!"
The officer in charge of the newly opened investigation hung up with the D.A. and went over to gather the new information.
"It's weird though, it's nowhere near where she's supposed to be living..."
"Where is it?"
"Well according to the location sharing in her social media she's in Montreux-Vieux. Almost thirty kilometres away from what the boyfriend told us."
"How sure are you of your information?"
"I'm positive it's where her IP address is. If it's of any help to us I don't know..."
The officer sighed, passing a hand through his hair. "It's better than nothing. We'll send the team out to see if they can find anything."
"Are you going to send the whole team?"
He nodded, "we never know, if she is there, this kidnapper could be dangerous."
He turned to face the room, and gave the orders for a team of 25 men and women to move out.
It was getting late, but the room was still active, alive with the hope of finding the victim before things took a turn for the worst.
Around four in the morning, they arrived at the address provided by the technician. They were in front of a house, as normal as could be. The street was quiet, all the windows were dark.
Proceeding cautiously, they went to the door, and banged three times. The squadron was positioned in a semi circle, ready for action, with a few people directly at the front door. When there was no answer, they banged on the wooden frame again. Lights turned on upstairs, and they saw the progression of their passage through the house, until finally the light on the porch turned on. They announced their presence, yelling, "Police" Open up!"
A man, rubbing the sleep from his eyes to reveal a worried look, opened the door, and the police pushed their way in to find behind him a woman, and from the top of the stairs, frightened looks on their faces, two young children, on the verge of crying.
There was a moment of silence. One policeman started pointing at the wife.
"Aren't you kidnapped?"
The husband turned around to look at his wife, and her eyes grew wide with incomprehension.
"We received a report from your boyfriend that you were kidnapped by your ex-partner. What the hell is going on here?!"
The husband stuttered on the word boyfriend, his eyes widening.
Having no news from the squadron in the house, the rest of the agents stationed outside came up to the porch, and faced with the incredulous looks of her husband and 25 policemen and women, she started to open her mouth to explain.
"He wanted to come over, he wouldn't stop, I had to keep him away, I couldn't tell my husband, he was nothing, he meant nothing, I've just been so lonely, I—"
She gasped for breath in a panic, and finally fainted, falling hard on the floor. The last thing she heard was someone calling for an ambulance. 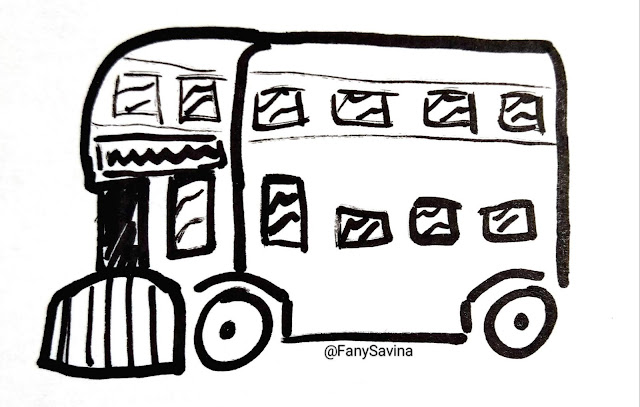 A bus or a snowplow? One day, I found myself unable to use my car to get to work. Through unfortunate circumstances, I had lent it to my family the Sunday night. Upon laying my head on my pillow that same night, a thought suddenly struck me. How will I get to work? The answer was obvious; I would have to commute, take the bus, ride with the plebeians. Of course, I had a normal lower middle class childhood —didn't everyone?— in Dublin, full of bus excursions, first to head to school, then to head to my friends', then to go to work, until I tasted the joy of a learner's motorcycle permit (queue Born to be Wild 🎶 ). Then the car licence followed, and I never looked back. I like the comfort of my car, my own music blasting, the windows up or down, the speed I want. So when I realised I would have to go back to taking the bus, leaving an hour earlier rather than just twenty minutes, the future looked bleak. First challenge, finding the change to pay for the t 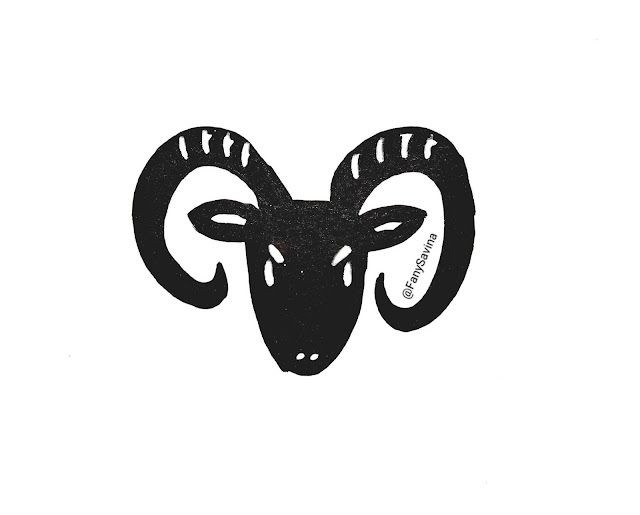 Source:  https://www.vosgesmatin.fr/faits-divers-justice/2020/01/15/une-octogenaire-attaquee-par-un-belier "I'm off to see the sheep now." Gisèle waved and started to waddle off. "Alright, did you remember to take the bread?" a nurse called out after her. She simply waved her little plastic bag in the air as a response. Her walk was pleasant. The air was crisp, the sky clear, all the makings of a good morning. It was a short distance to the farm where the animals were kept, but age had caught up to her and distances were relative to how badly she felt her arthritis. When she was in sight of the field, she started calling out feebly. "I'm here! Hello!" The sheep, roused by the noise, all lifted their heads. They looked in Gisèle's direction and the ram, leader of the pack, started to trot towards the fence. The sheep, being sheep, followed. The old lady was touched by such a scene. They recognise me, she thought. For someone who had